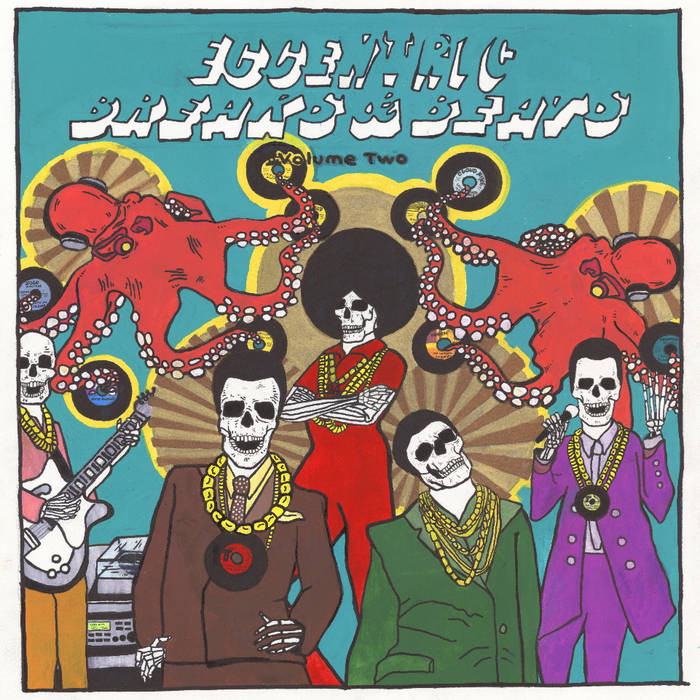 Numero Group - "After we issued Eccentric Breaks & Beats last year our inbox was suddenly flooded with junior producers looking to do something similar. A handful of sorta-okay-but-not-really-that-great entries were submitted, but none could touch the original Shoes boot.

When Adam Calman from Parallel Thought dropped their entry into our lap a few days into the new year, we were eyeball-deep in royalties and couldn’t process how good the mix actually was. It was played on computer screens, background to our Excel nightmare. When the tide of checks and statements ebbed, Numbero 2 was engrained in our minds, we just didn’t know what to do with the damn thing.

Between Pressed At Boddie, the Penny & the Quarters debacle, Willie Wright, Salsa Boricua De Chicago, Father’s Children, Nickel & Penny, and our looming Boddie box set, there seemed to be no room for another record. And rather than let EBB Volume 2 collect dust and play counts on our hard drives, we decided to let it live in the same manner that the original EBB had: unfettered. But perhaps best of all, we’ve decided to make it free.

If you bought Volume 1, you may’ve noticed our bite on the original Ultimate Breaks & Beats cover concepts. We enlisted Eliza Childress, second runner-up in our Pressed At Boddie design contest to create another ridiculous/hideous cover, and we think she succeeded. That she turned it around in five days is perhaps more impressive."

Lastly, Adam Calman sent over a little context for the mix:

With 2011 being Drum and Knowledge’s’ (founding members of the label and musical collective that is Parallel Thought) 10 year anniversary, they decided to create a project that would represent the hard work they had put in over the past decade. Being a classic hip hop production group, their appreciation for samples and the artists of an older era seemed natural to evolve the project into a instrumental mix of beats, breaks and edits of songs that moved the soul. By choosing one labels library (the mighty Numero Group) to use as the source for their musical collage, they found creative freedom to use parts of samples that would normally be avoided in conventional hip-hop because of clearance issues. In the sprit of the culture, the idea and project itself was very spontaneous and began without permission from anyone. This turned into a challenge for the group who knew that the only right way for the project to come out would be to impress the label who’s records they sampled enough to agree to its release. With the blessing from Numero, this project truly does showcase how music from the past can still lay the foundation for music of the present. For a 10-year anniversary release, we at Parallel Thought, could not be prouder, heres our gift to you!

Jeff Blacker & Adam Calman otherwise known as the production duo Parallel Thought have been making Hip Hop music since 2000, based out of Freehold New Jersey

Bandcamp Daily  your guide to the world of Bandcamp